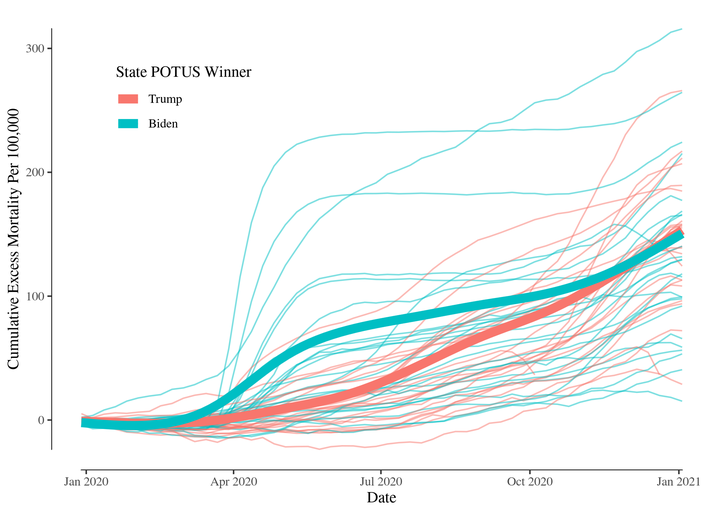 I was discussing the effect of the Trump being President during the bulk of the first year of the COVID-19 pandemic. My friend believes that Trump had a significant negative effect on the course of the pandemic in the United States. Meanwhile, I think that Trump was not helpful but the marginal improvement of another person in office would have been small - perhaps 5-10% as an upper bound.

I wanted to know who was right and, me being me, I wanted to answer that question with data. I’m skeptical of case counts. They are under-reported and extremely time-variable. I have a greater trust for measures of excess death, although given the time-varying mortality rate with better treatment and monoclonal antibodies this isn’t perfect either. Yet, it is a lot harder to miss a death than miss a slight headache and so it is the best of the, admittedly, suboptimal measures.

Luckily, the fine people at the Economist have gone through the trouble of tracking the excess deaths and shared that data on Github. The data includes weekly measures of excess mortality per country and, within some countries, sub-national areas (e.g., states in the US).

For now, I’m going to focus on the United States only analysis and compare the cumulative excess mortality between states based on their elected leadership (Democratic or Republican governor), the winner of the Presidential election in 2020 in that state, and Trump’s vote share by state. My hypothesis is that Trump’s influence is greater in states with Republican governors and it is clearly greater in states that Trump carried in November. The vote share gives us the ability to assess for a dose-response pattern with increasing levels of Trump support.

Does the Party of the Govenor Matter?

Of the 50 states (+DC), there are 27 states with Republican governors. Do those states have greater cumulative death rates? To answer this, I calculate the total number of excess deaths in each state between the start of the pandemic and 2021-02-08 - the latest day with data.

As always, I start with a data visualization. 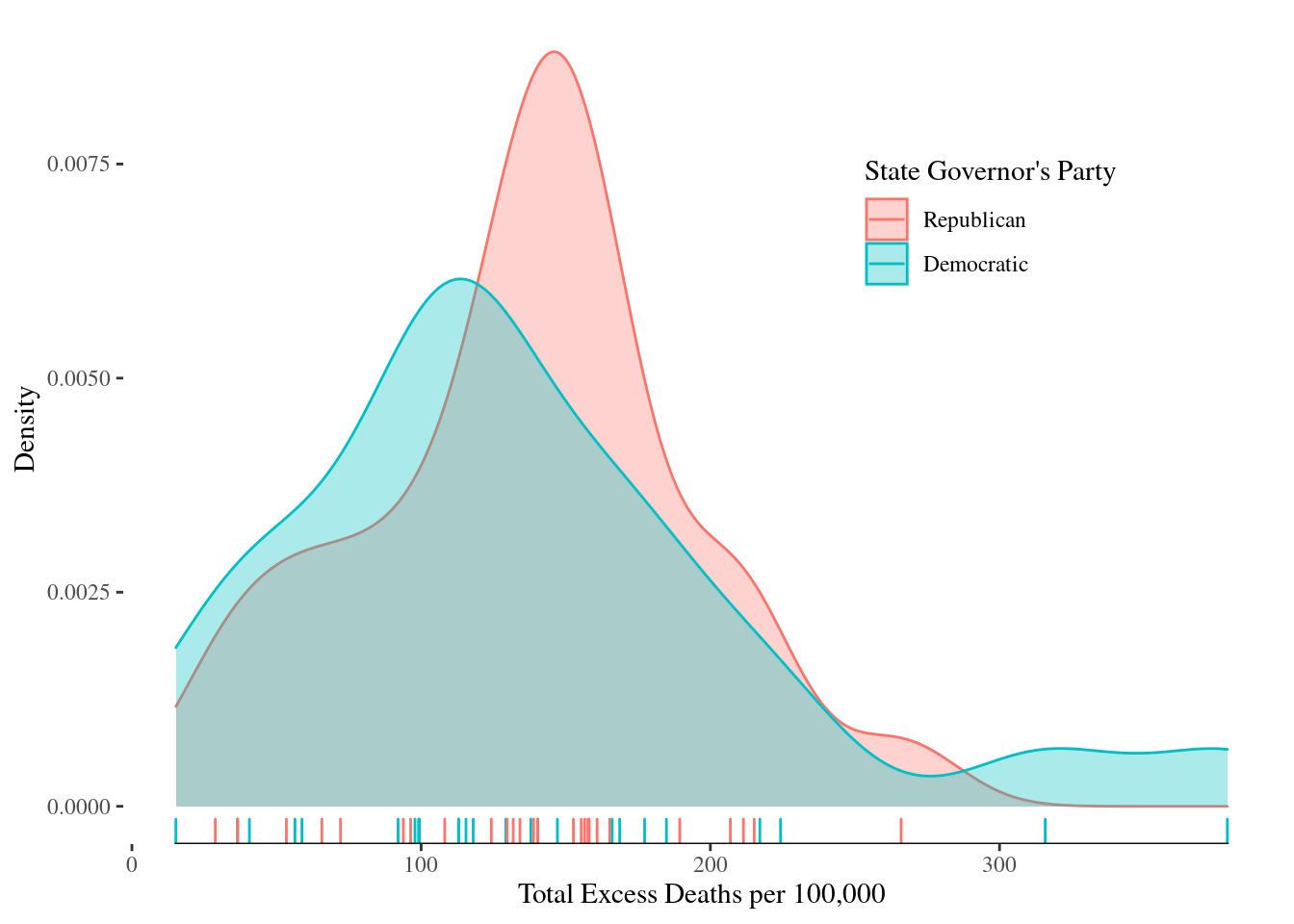 Fails the interocular trauma test: the result does not hit us between the eyes.

Formally, I test this using a quasi-Poisson GLM. This count of excess deaths becomes our response. Our independent variable is the party of the current governor of the state. We include as an offset the log number of people living in the state multiplied by the number of weeks of data for that state (e.g., the number of person-weeks at risk).

The states with Republican governors had 2% greater cumulative excess deaths than states with Democratic governors - but this effect is nowhere near statistically significant (p = 0.9).

Did States that Trump Carried Have Higher Cumulative Excess Mortality?

Did states that Trump carried more than 50% of the two party have have greater excess mortality? 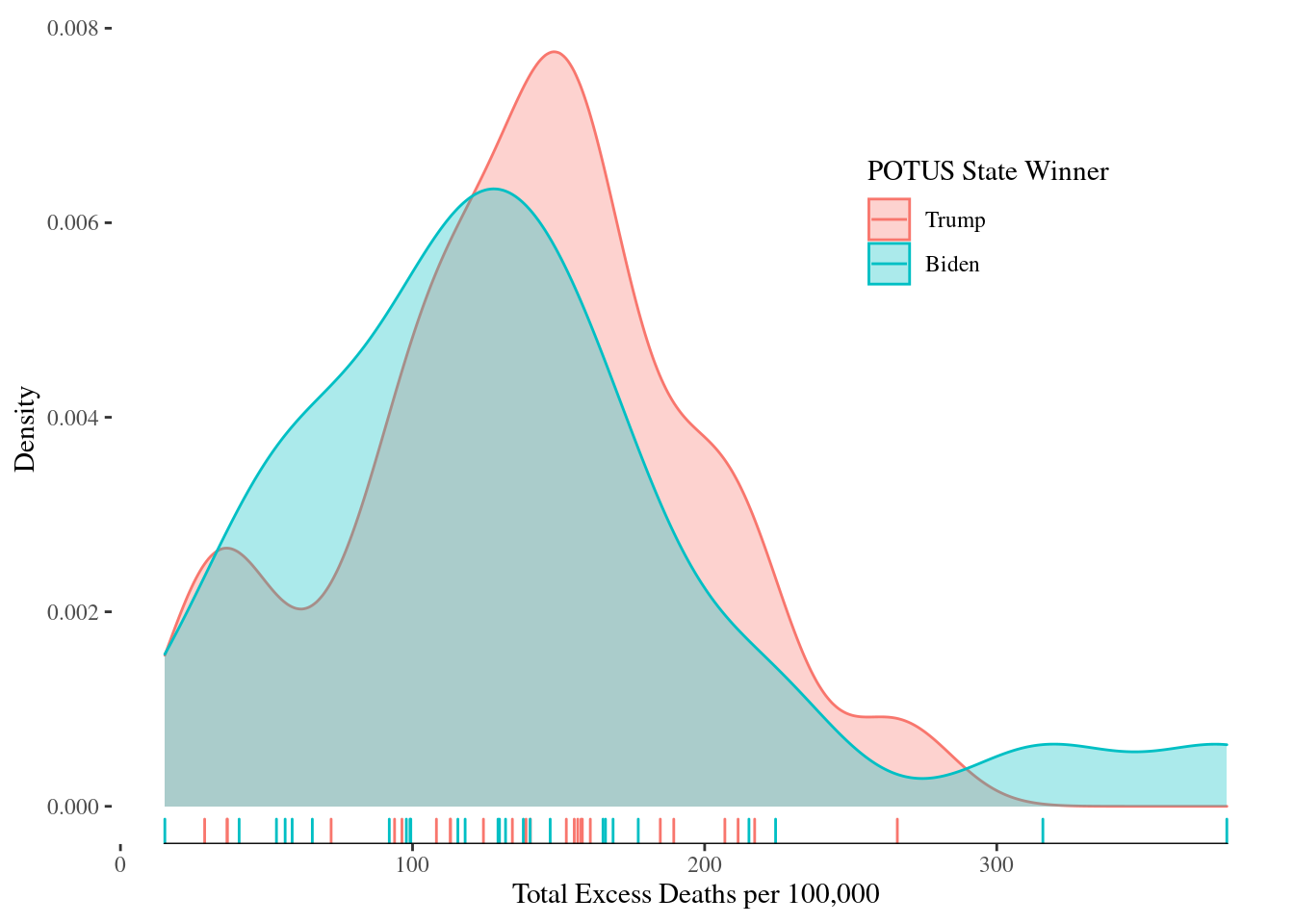 Which the quasi-Poisson model backs up:

States won by Trump have had, so far, 5% lower cumulative excess mortality than states won by Biden.

Overall, there doesn’t appear to be a relationship, but it is a little hard to tell because points like DC and NY are outliers. 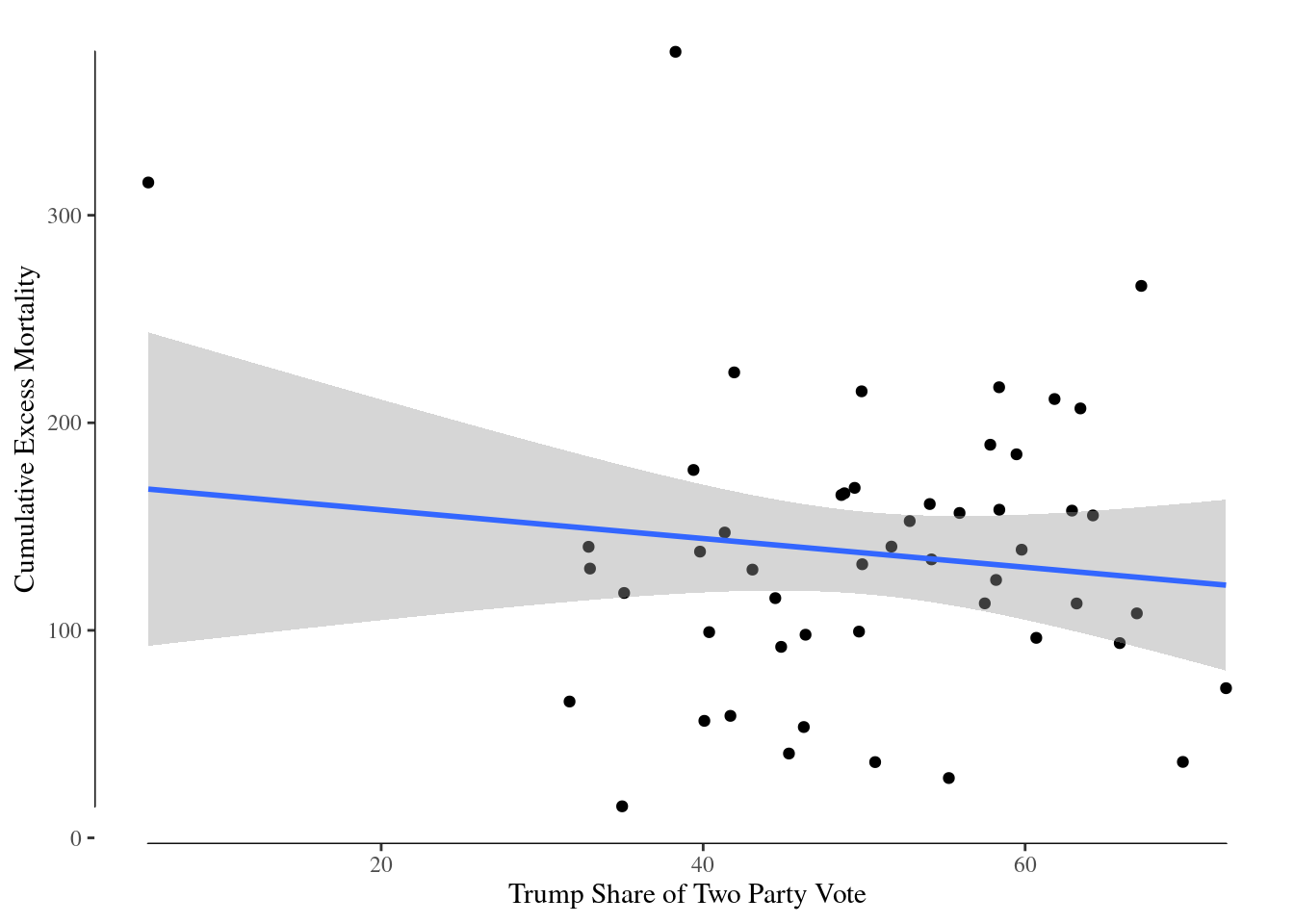 There might be an effect if we drop NY and DC: 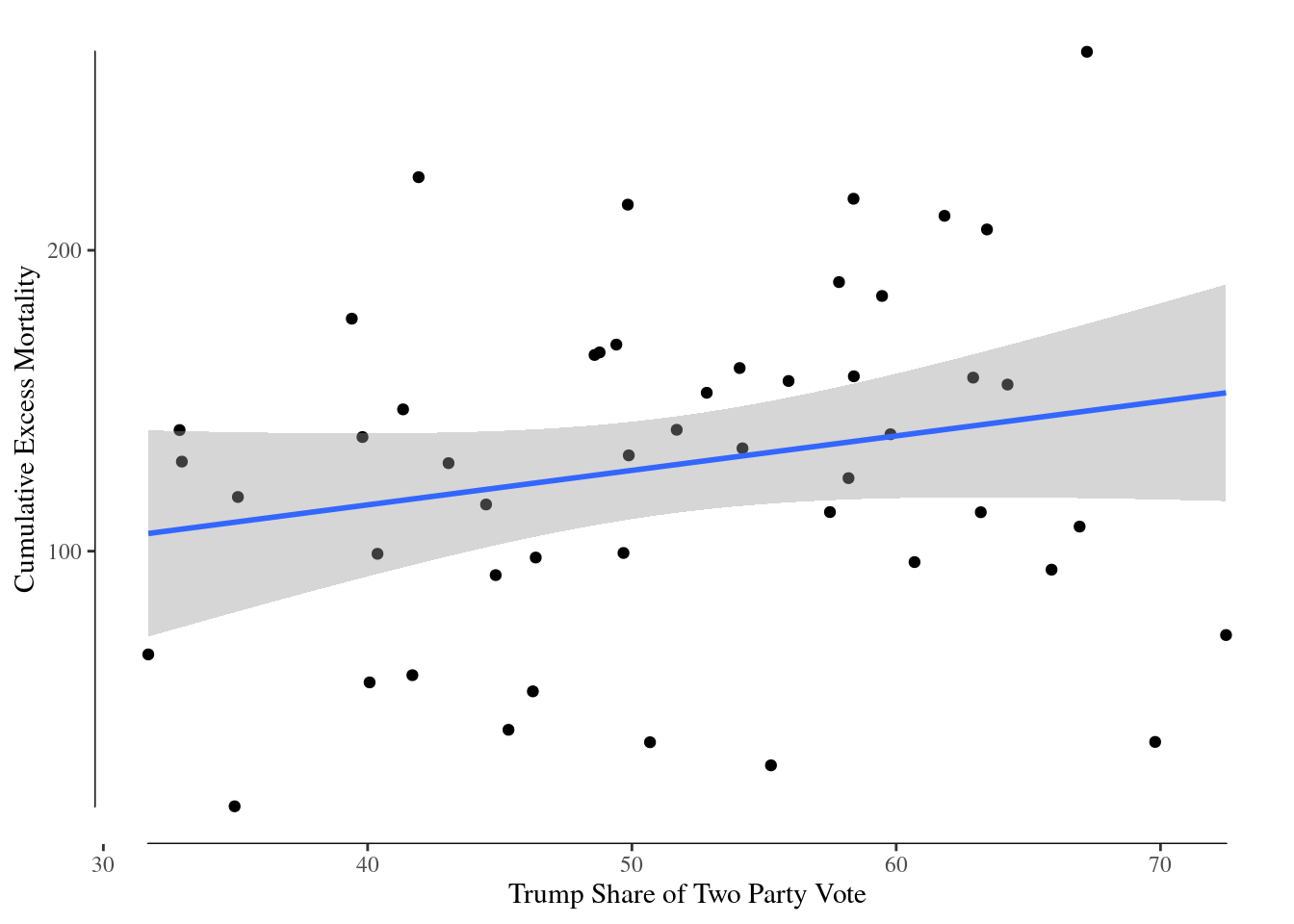 Turning to our trusty quasi-Poisson models:

There is an association between Trump’s vote share and Republican governors and a state’s total excess mortality; however, the effect is non-significant. Even if the estimated effects were statistically significant, they would almost certainly not have been clinically relevant.

If we plot the change in cumulative excess mortality for each state and the collect of Trump and Biden states (moving average is the solid line, each light line is a different state), we see that the outbreak had different timings in different cities. The early outbreak was largely isolated in a few states whole the later phase was more distributed. Both Trump and Biden states were seeing similar recent increases in excess mortality. 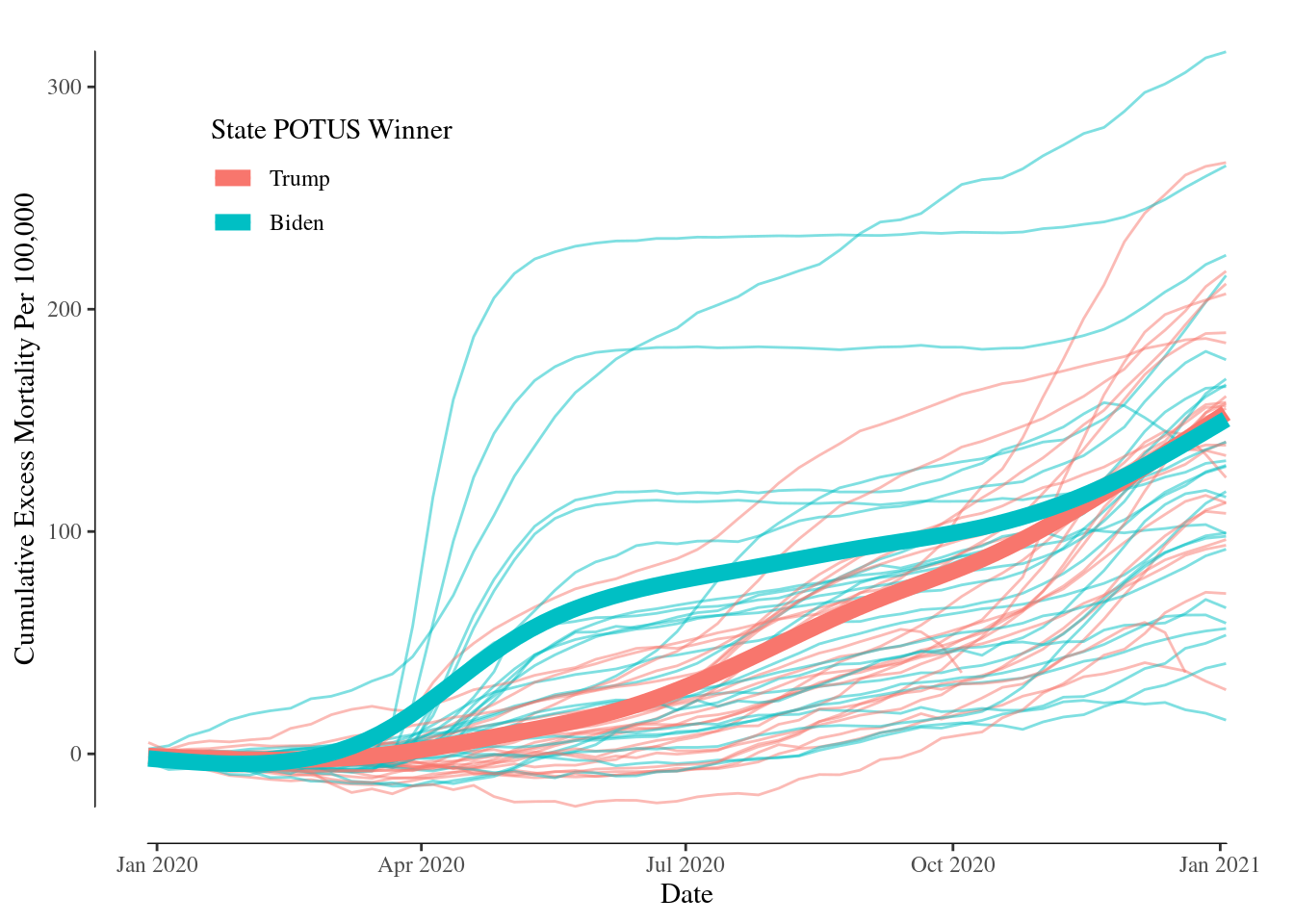 All told, essentially no state handled COVID-19 well. The lack of difference between states in outcomes - especially excess mortality, the outcome most robust to under-reporting - suggests that a counterfactual COVID-19 pandemic with someone other than Trump in the White House likely would not have resulted in a major difference in outcome. The messaging would be different, that’s true, but the result would likely be similar.

Indeed, the United States, while not being a global leader, has had a similar pandemic course to many other countries. Each line in the figure is a different country with a few key “peer” countries highlighted. By all means, improvement was possible (looking at France and Germany) but worse courses were also possible (looking at Spain and Italy). 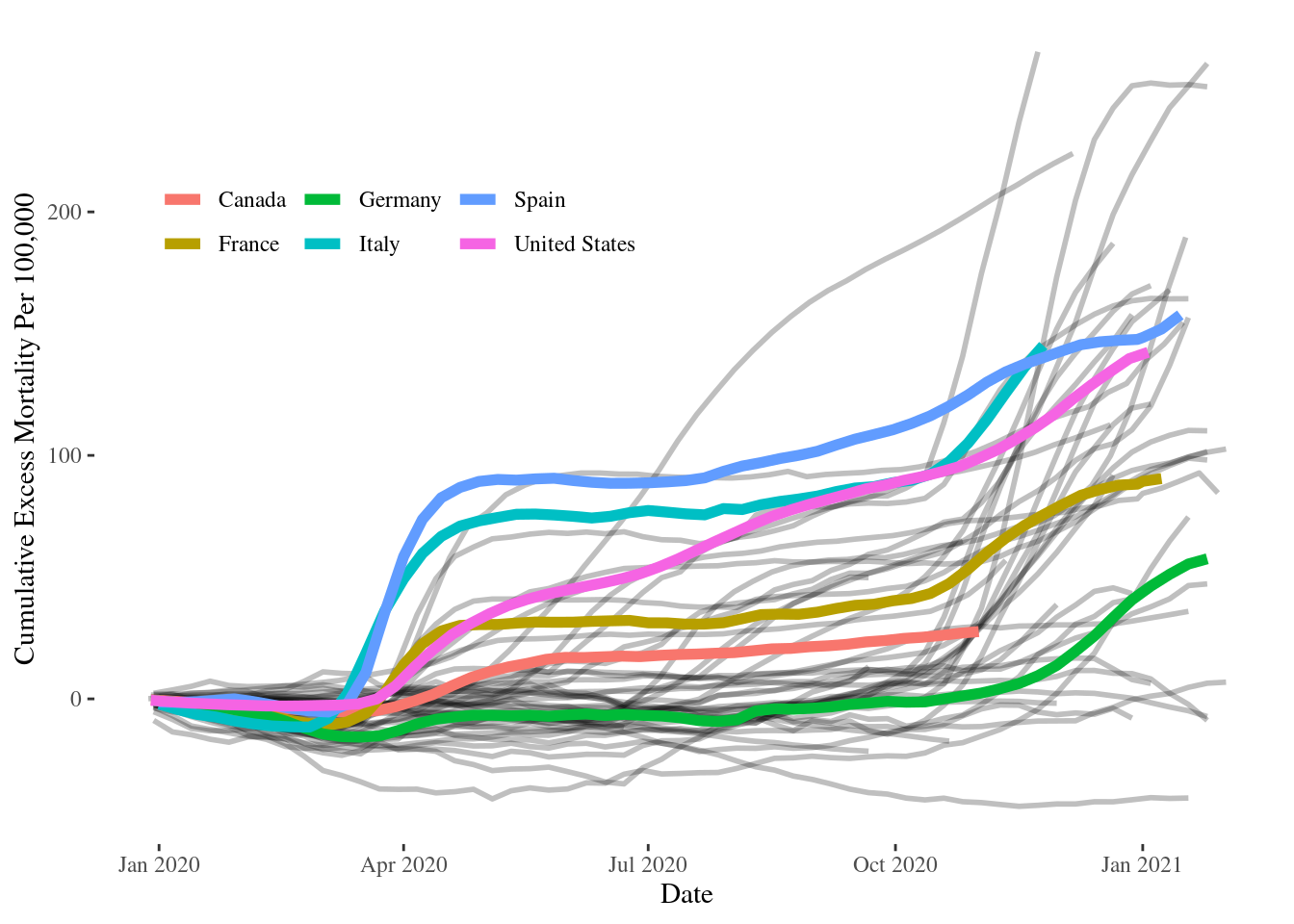 It is true that Trump failed a leadership challenge during the pandemic, there was a lack of a “unified” national plan, some of the public health agencies had confused, censored, or poorly understood communications. In many ways, Trump might have been the worst possible person to hold that office during the pandemic.

However, the extent to which Trump made the pandemic worse is unclear. There is no compelling evidence that Trump-favoring areas of the country had worse pandemic courses than areas that were more Biden-favoring. States with Republican leadership didn’t have worse cases than states with Democratic leadership. It seems likely that Trump made the pandemic worse, on the margin, but the effects were small. The pandemic on Earth 2 where Clinton won in 2016 is nearly as bad.

The troubling thing is the appeal of the reductive message: “Trump is the reason that the pandemic got so bad” or “Republican governors let the pandemic run unchecked in their states.” These conclusions aren’t supported by the data and, if we accept them, we fail to address the real problems. Public health, from a local to a federal level, has repeatedly failed us during the pandemic. They went from “there is no risk to the general population” to “shelter-in-place” over a period of mere days. Recommendations came late - like masking - and remained static too long - still directing people to wear cloth masks over more effective procedure masks. Schools remain closed in many areas, despite compelling empirical evidence they can be open and the known importance of schools for a child’s development. A year lost is functionally irretrievable. Meanwhile, bars have been open almost uninterrupted.

By accepting the easy answer - “Trump did a bad job” - we ignore the problem and will find ourselves shocked by the next pandemic.